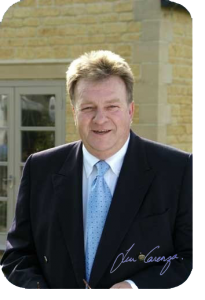 Carenza Builders was founded by a young 21 year old Lui Carenza in 1979.

I trained as a carpenter and joiner and by 1983 in the boom times I was employing over 50 carpenters working for just about every builder in Gloucestershire supplying labour only tradesmen on major construction sites. I then decided to take on complete building projects to run alongside my carpenters and quickly built a reputation for getting the job done on time and on budget.

By 1986 I was employing over 100 tradesmen and was awarded a large section of work on a prestigious project restoring the late Spencer Churchill’s home at Northwick Park near Blockley for a London company call New Cavendish Estates plc. This was a major project to undertake but the opportunity could not be missed, a £12 million project over 5 years. Unfortunately because the recession hit in 1989 New Cavendish did not complete the project that was only halfway through, but the positives that came out of it was the experience I gain working with some of the most highly skilled stonemasons, joiners and many other tradesmen around the Cotswold’s, it was invaluable and I still work with them and many of their sons today.

To this day we continue to renovate and extend beautiful local properties revitalising them back to their former glory. Take a look at our gallery and see some of the projects we have completed both residential and commercial. Our company prides itself on quality and performance giving our customers complete satisfaction that the job will get done within whatever budget we have to work with.